Join Actions are pre-defined actions that you can perform on remote devices. Actions can be performed from various places on your Android device:

These are also available in Chrome as extra buttons you can add to each device.

Places To Use Actions

If you touch an action in Join -> Actions you can select where you want it to appear. 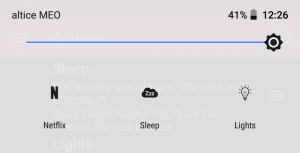 After creating an action, edit your quick setting tiles panel and add a “Join Action” tile to your panel. You can create up to 5 quick tiles with Join actions. These will be the first 5 actions on your list for which you have enabled the quick tile option. 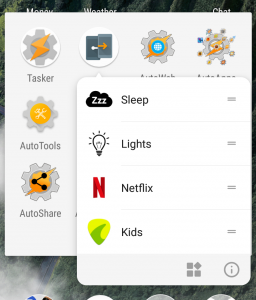 If you long click the Join icon you’ll be able to see the actions you have enabled App Shortcuts for. Depending on your system, more or less number of actions can appear here, but the maximum is usually 5. 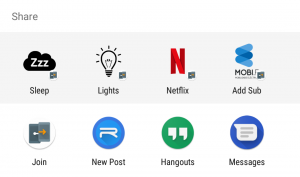 When you share something on an app and the default Android share menu shows up, Join actions will show up there. Set the share target priority to 100 if you absolutely need them there, or make priority lower if you want Android to show them less times. Up to 4 actions can appear here. The actual content you shared will be used as the action’s input. For example, if you have an action to say something on a different device and share some text to it, it’ll say that text out loud on the device.

You can make your Join actions appear in Join notifications created with the Join API. To add those actions add them in the actions parameter of the API URL, and separate them with |||

For example, to create the above notification you’d use a URL like

If the actions allow for input, the text and title of the notification will automatically be used as input for them.

If you want you can use custom input for them by using this format:

So separate the inputs on each action with =:= 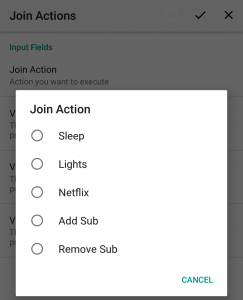 These are actions that allow you to perform built-in Join actions on other Join devices. For example:

You can either pre-fill the input of the action (if available) or leave the input empty so it’s prompted when the action is ran.

For example, let’s say you want to have a Home Screen shortcut that says “Time for dinner” out loud on your kids’ phones. You’d

Now any time you click on the shortcut it’ll say the text out loud on their devices!

These are actions that don’t actually do anything by themselves until you’ve configured the recipient to do something with them.

Some examples of custom actions you can create:

…you get the idea 😀 Basically anything that the receiving device supports you can do from a custom action.

Reacting to actions depends on the receiving device:

In Chrome you can create actions by going into the extension settings and creating them in the Actions tab.

All actions created here will be Custom Actions.

When selecting an icon it’s best to always use direct SVG code so that the icons can be themed with the colors you selected for your theme. Here’s a good way to get some material design SVG icons:

The icon should now show up and be themed correctly.

You can also use any PNG or SVG icon URL from the web directly. Colored icons will show their original colors.